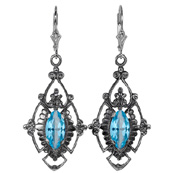 It is said that the blue topaz represents a very important high point in the life of a couple. Thus it is the official stone for the 4th, 19th and 23rd wedding anniversaries. Giving your lady a piece of blue topaz jewelry suited to her style is a beautiful way to commemorate your love and life together. Read more.

A member of the topaz family, this gem comes in an array of stunning blue hues. The blue gem is readily available and affordable—it can be found in a wide variety of shapes, cuts and sizes. The blue topaz jewelry offered by Apples of Gold captures the unique, dazzling beauty of this stone. Whether you’re picking out a ring, a necklace, or an amazing pair of earrings, blue topaz sparkles for special occasions.

This stone also holds Biblical significance. Although it is not specifically blue topaz that is referenced, there are many topaz occurrences throughout the Bible. Mentioned in the book of Revelation, topaz brings sparkle to the walls of New Jerusalem. This stone has been known for over 4,000 years and holds a much deeper historical meaning then most know of.

While many imagine blue topaz to be a light blue color, the stone in fact holds more shades of blue than the icy sky hue. Although naturally colorless, it gets its eye-catching colors from the effects of heat in its environment. Whether it is heat-treated by natural elements, or treated by a jeweler, the stone has emerged in many vivid shades such as a deeper blue, a Swiss blue, and the best known: sky-blue.

When considering blue stones, sapphire naturally comes to mind. But Blue topaz jewelry should not be overlooked for women who prefer a blue gemstone. The blue topaz is available in colors that are comparable to the sapphire at a much more pleasant price, an without sacrificing quality. Blue topaz even makes an attractive center stone for an engagement ring.