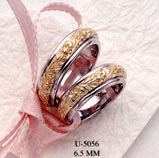 Marriage brings together two distinct individuals, each with their own hopes, plans and dreams, and molds them into one. Two tone weddings bands for women symbolize the unity that is built between husband and wife, using two different yet complementary elements that form a single object of beauty. Each of these pieces utilizes two metals to form a single, seamless whole.

No matter what metals are in your jewelry box, two tone wedding bands for women will coordinate without skipping a beat. The versatility of these rings, and the ease with which they complement any outfit, makes them ideal options when choosing a piece that will be worn every day, with everything from jeans to evening gowns.

White gold and yellow gold share the stage in many two tone wedding bands for women. This contrast between warm and cool makes each metal stand out against the other. The combination of yellow gold and platinum has a similar effect, as do designs that utilize both yellow gold and sterling silver. Sterling silver and yellow gold rings are a particularly economical option for those who are looking for a gold ring without the price tag of solid gold. If you’re drawn to the slightly out-of-the ordinary color of rose gold, but aren’t sure if you want to commit to its pinkish color in a wedding band, styles that combine this metal with white gold offer a gentle yet unique break from tradition. Read more.

The two-tone effect can be subtle, attention-grabbing or anything in between. From thin ring of yellow gold set against an otherwise white gold band to daring yellow gold designs that seem to jump from contrasting backgrounds, two-tone wedding bands for women cater to nearly any taste.

Two-tone rings take many styles up an extra notch, turning plain bands into conversation pieces and hammered rings into eye-catchers. Designs that were understated in sold white gold or yellow gold take on a new dimension when given the two-tone treatment.

The contrast between two colors of metal makes a number of designs truly pop, from seamless Celtic knots (adopted by many as symbols of eternity) to vintage Victorian motifs to graceful braids. It also turns several rings that feature symbols of faith into statements that are both beautiful and bold.

Like the blending of two lives into one, the combination of two metals in one ring results is a piece that’s more than the sum of its parts. Two tone wedding bands for women are pictures of two hearts beating as one, each making other stand out and shine.